Chengdu, located in southwest China, is the capital of Sichuan province. Since 1999, drawing the support of "Western development Policy", Chengdu has made earthshaking changes. In 2010, Forbes unveiled top 10 fastest growing cities in the next decade and Chengdu won the first place. In 2015, Chengdu was also selected in The New York Times’ list of the world’s 52 must-see places. Till now, Chengdu has become the most important economic, cultural, and transportation center in Western China. Chengdu enjoys nice weather and is also widely known as “The City Impossible to Leave after Coming”.

More than four thousand years ago, the pre-historic culture of Jinsha was established in this region. The fertile Chengdu Plain, on which Chengdu is located, is called Tianfuzhiguo in Chinese, which literally means "the Country of Heaven", or "the Land of Abundance". Second only to Beijing, Chengdu owns five UN World Heritage sites. Numerous gorgeous scenic areas, including The Giant Panda Breeding Base, have solidified Chengdu’s reputation as an ultimate tourist destination.

China's state council has designated Chengdu as the country's western center of logistics, commerce, finance, science and technology, as well as a hub of transportation and communication. It is also an important base for manufacturing and agriculture. By June 2015, 265 Fortune 500 companies had set up branches in Chengdu, ranking as the first in terms of the number of Fortune 500 companies in Central and Western China. The United States Consulate General at Chengdu opened on October 16, 1985. It was the first foreign consulate in west-central China since 1949. Currently fourteen countries have consulates in Chengdu. The United Kingdom also has a visa application center in Chengdu. Chengdu Shuangliu International Airport (CDIA) is 16km southwest to the center of Chengdu City. The airport is connected with downtown through highway. It also has long-distance buses to major cities within Sichuan Province and buses and taxies services as well. Until December, 2014, there are altogether 241 routes, 78 of which are international (regional) routes. Chengdu airport realizes air traffic to 187 domestic and international (regional) destinations. Chengdu International Airport is the largest aviation hub in central and western China, and aims to form the national aviation hub in mainland China and the World Best 10 airport. 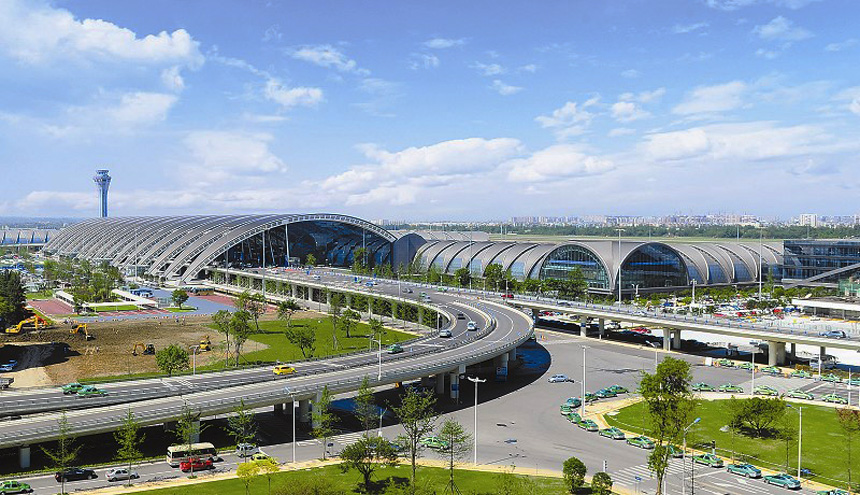